Helping you reach your fullest potential.

Bihar is power starved state there are not sufficient power projects in the state which can cater the energy need in Bihar. For this purpose Bihar State Hydro Electric Power Corporation was constituted in Dec. 1982 with a mandate to harness all possible resources of hydro energy to meet the existing demand gap of power. BSHPC is giving  close attention to exploiting small energy resources and renewable energy recourse. BSHPC has identified several mini hydel projects in Bihar.  Bathnaha is one of them.

Parman river is a perennial rivulet, which originates from Nepal and enters India near Jogbani this water as per the studies also comes from ice melting from Tibet also to the extent 57% and now it is increased due several earth wakes the seepage also passing through fracture of rocks due earth wakes and remaining water is through Nepal . The river crosses Birpur-Bathnaha-Jogbani road opposite to railway Bridge on Forbisgang-Jogbani section of NEF railway. Another perennial rivulet Burhi Dhar joins Parman river is at 500 m upstream of the above road bridge. The road bridge on Parman river is of 100 m span and the river bed is about 5 m to 6 m deep. The road bridge is located about  3 km from Jogbani and 1.5 km from Bathnaha.

Bathnaha project can be established creating a small reservoir  on Parman River by constructing a diversion weir across  Parman River near Barthpur village.

Kosi River Basin in India from a part of the Gangetic plains and is situtated in direct path of the tropical depressions during the monsoon season 85% of the annual rainfall occurs in the monsoon period of June to October. The catchments in Nepal contributes a major portion of the run-off in the Kosi River.  The  Parman is river  Perennial River, which carriage huge discharge the boundary of Nepal is 6 km away of the  project site. The discharge also come from melting of Himalayan snow. The ground table is very high.  There is heavy seepage.  This river to Tributary to Mahananda basin. The hydrological studies of the  Parman River have been carried out in order to determine the Optimum Techno Economic Potential of the site to work out the design flood discharge and related issues.

Socio-Economic condition of the area is not good. The project will improve the situation, as it would provide employment opportunities to the local people. This  project will also serve for the  purpose of flood control as well as improve the surrounding ground water level in every monsoon season, area and villages located on both banks of the Parman River face the threat of floods. Construction of  earthen bunds on both banks of  the river would thus not only provide requisite storage but would also ensure that the villages are protected from floods.   It is understood that Bihar Government is prepared to bear the expenditure of constructing the requisite earthen bunds and hence the cost of constructing these bunds shall not be charged to  Bathnaha HE Project.

The bridge will works as means of communication for the poor farmers. In this environmental friendly  project  which is  eligible for 35% subsidy of carbon credit.

COMPONENT OF THE PROJECT

The project is dividing in to following component.

AWARD OF THE WORK

Tender for the execution of civil work   for the Bathnaha Power Project was floated in February 2010 and the work was allotted to M/s Tecsol Sierra   Engineering and Construction LLP. vide agreement  no. 09 on Nov. 18, 2010 with agreement cost of Rs. 42,73,94,400.00 including construction of  hydro mechanical gates.

Hydro-mechanical was allotted to M/s HPP with agreement cost of Rs. 2284.16 Lacs (Tax is extra as per statuary deduction in E/M works)

STATUS OF THE PROJECT

Company is fully equipped with the required infrastructure to implement project on hand apart from skilled manpower etc. All materials required for the project are readily available with the Company. Following is the man power strength of the company: 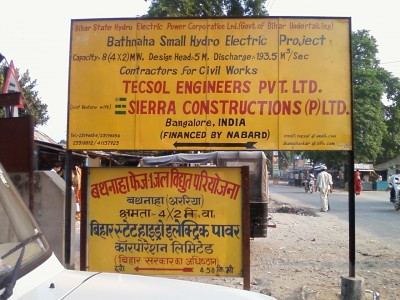 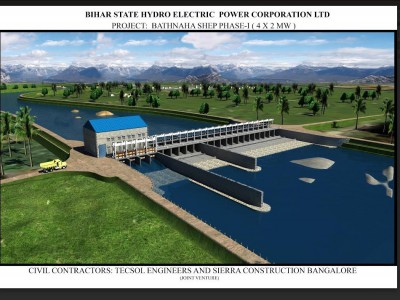 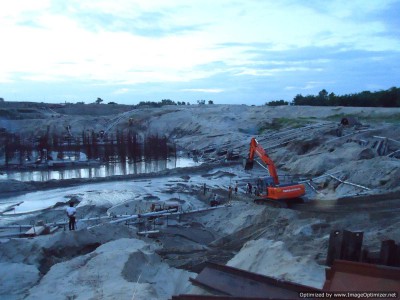 Looking for a quality and affordable constructor for your next project?